Disneyland in the fall is fun for all! The park is layered with pumpkins and autumn leaves, and the added rides with halloween themes!

The pleasure of going to this home-away-from-home last week was all mine, and my friends Kelsi and Lauren’s. (Special thanks to Lauren for taking us!) We spent the afternoon and evening snacking on delicious Disney food, standing in lines, going on rides, people watching, and donning our lovely tourist mouse ears. As you can tell… 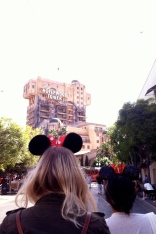 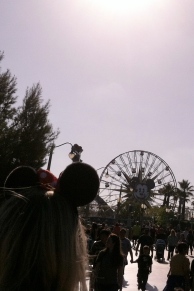 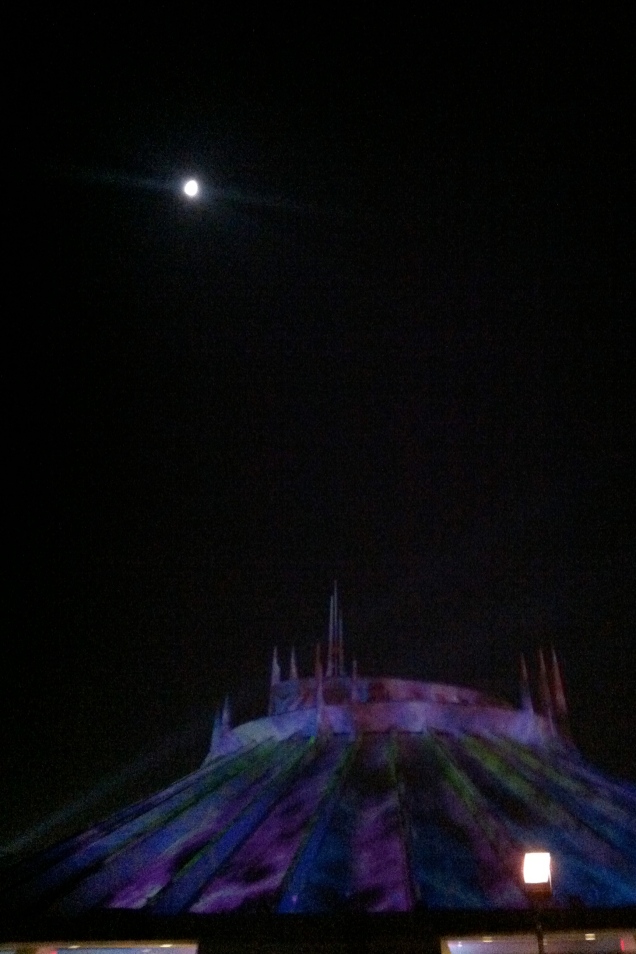 Be sure to check out the Halloween rides while you can! The crowd favorite is the Haunted Mansion, where Jack Skellington brought in his own version of christmas, just like in Tim Burton’s original movie, A Nightmare Before Christmas. Disney also added a frightening element to Space Mountain. The ride itself had little to fear, but the line is what frightened off all the children! Be prepared to watch the space mountain towers glow an eerie red as alien howls sound off from within.

We completed our day with more thrilling rides in both California Adventure and Disneyland, my first trip to Cars Land, a tour of the sourdough factory (because sadly they closed the Mission Tortilla Factory 😦 no more maseca), a main street parade, the spectacular firework show, and tasty caramel apples. …Can’t wait to go back!

To close, I would like to share my favorite video, which will never be seen in person again.

Thank you for the corn you may go now 😉

Photos taken by myself and Lauren (connect with her on instagram).

In 1995 Disneyland joined forces with Indiana Jones and his crew to uncover The Temple of the Forbidden Eye, an ancient temple full of secret passages, booby traps, and near death experiences which occur approximately every 20 seconds.  Luckily Indy himself is present in this temple to help save us from impending doom, but without him or the capable driving skills of any park guest sitting in the driver seat, Disneyland would actually be the saddest place on earth.

When the temple first opened to tourists in 1995 decoder cards (pictured above) were given to visitors at the beginning of their journey as a means of warning them about the dangers ahead.  The cards offer a key for reading Marabic, a language that has only been found to exist in this 2 acre plot of land where the ruins of The Temple of the Forbidden Eye were excavated. It is noted that the writing inscribed on the walls offers practical advice on how to make it out of the temple alive.  For more information, I recommend you read this detailed journey of one mans experience in the ruins; “How to Survive Disneyland’s Indiana Jones Adventure”

The grand opening of Indiana Jones and The Temple of the Forbidden Eye occurred during Disneyland’s Forty Years of Adventure campaign.  I tried and failed to find a video with the theme song Disneyland adopted that year, it went something like “Forty Years of Adventuuuuure, Forty Yeeeears of Fuuuuun!!!!”  This theme had completely slipped my mind until my mom showed me these decoder cards and we both started singing it. This could have been a “you had to be there” moment, more importantly 1995 was a significant year in Disneyland history, and not worth forgetting.  For more proof of this ghost memory, I hope you can admire my Disneyland Passport from 1995 (pictured below). I would have been somewhere between the ages of 4 and 5 when I used this, I have photographed it next to the decoder for your convenience, so you can see how the Marabic language is read.

The background reads “FORTY YEARS OF ADVENTURE.” I have added words and circles to show you how I came to this conclusion.  The writing is such that if you are slightly familiar with the characters, and squint, you can almost read it as English.  Who knows, maybe our history has it wrong, maybe the English alphabet came from Marabic. It might take another 40 years to uncover any more clues.  Until then, enjoy the adventure, I dare you to discover as many secrets of the ruins as you can, the hidden Mickeys and booby traps are indeed still there.  The writing on the wall is practically begging to be read. Keep in mind that the longer the line is the more time you have to prepare yourself for survival.  Don’t be afraid to skip the fast pass altogether and bring your decoder along instead!  (save the image to your phone for easy access).  Your friends and family will thank you, and so will the people standing around you in line who were probably very bored (and scared!) until you came along to share this good news.

My brothers and I as Minnie, Mickey, and Donald for Halloween 1993

**Greetings all! I have added this brief section in recently, due to the popularity of the picture above for Halloween. To make these costumes, my mother purchased the Minnie, Mickey, and Donald Duck character hats from the Disneyland store back in ’93. She dressed us in the proper colored leggings, bought white gloves, black long sleeve shirts, (a blue for donald) and then sewed together the rest by stitching felt dots on top of the basic solid colored bottoms. The shoes are simply yellow vinyl which my mother caught from an old yellow vinyl poncho, and then tied around our feet with a shoe lace. So easy, and so gosh darn adorable. Happy Halloween – please share your own photos, and I’d love to hear your comments below!**

For anyone who has ever known me as long as 24 hours has also most likely become aware of how I grew up at Disneyland. This was an honor and a privilege and a duty I performed, in living less than 30 minutes from the park. You know this because I reference Disneyland in common conversation, not in the quoting The Lion King kind of way, more like “wow this Pier 39 in San Francisco reminds me of the boardwalk in California Adventure” or “This Willamette River in Oregon sure does look like the river that runs behind Tom Sawyer’s Island” or even, “it’s crazy how much this cruise through the tropical rain forest in Costa Rica looks like the Jungle Cruise! (if the hippos were crocodiles).”

The Tropical Rainforest in Costa Rica versus the Jungle Cruise. (Jungle Cruise photo retrieved from http://www.sandcastlevi.com/)

My worlds have been flipped. Whenever I travel anywhere cool, I’m brought back to memories of Disneyland.  This phenomenon is actually rather impressive and concludes that Disneyland does an excellent job making their landscape geographically correct.

Most people experience Disneyland only a few times in their life, if any, but I have visited the park more times than I can count. It was only until I attended a college 1,000 miles away that I stopped buying the annual “passport” and going multiple times per year.  Now that I am back in Southern California I would love another passport, but the cost of one has increased exponentially, and is higher than anything inflation could even dream of.  Disneyland sets their own inflation rates, I think it has something to do with the elasticity of their happy meter, being The Happiest Place on Earth and all.

There is far too much to take in on one post. So I suppose this time I will simply show my credentials, and prime you for more to come. 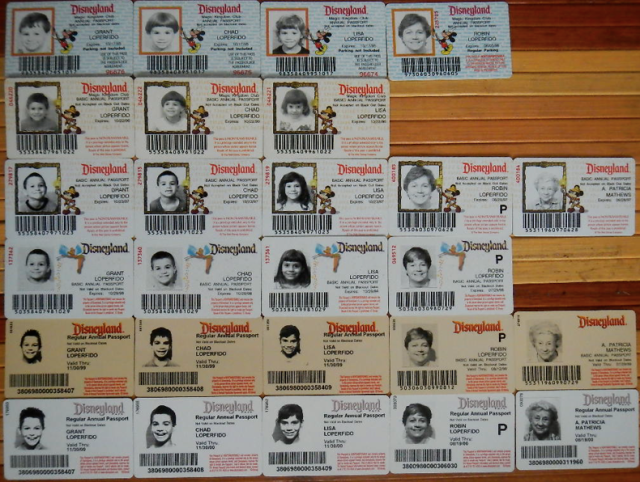 A timeline of Disneyland Passports. My brothers and I were 4 years old through 10 years old while we had these. We used to go after school on Wednesdays because that was short day when we got out of class at noon. Can you imagine?  Disneyland every Wednesday for a full year?  We rarely went in the summer of course, too many tourists, too many black-out dates.

This is what the backs of our passports once looked like.  Aren’t they beautiful? Perhaps it has changed in the past 5 years, but most passports now just have a blue background with Tinker Bell waving her wand all over it.  You’d think Disneyland would put a little more effort into making their current ones as unique as these 15-ish year old passports. A current piece of Disneyland plastic goes for about $500…

These are our mug shots at four years old, aka, our first Disneyland Passport, a “Picture Passport” if you will, complete with Polaroid photo and laminate cover.  You could say I look blue, but I’d argue brownish-gold.

BTW I’m totally guilty, I quote The Lion King all the time – if you didn’t catch that.

There is more to be seen, than can ever be seen, and I will be posting more Disney posts as soon as I can.  Look forward to ways of saving money at the Park, secrets to seeing the whole resort in one day, and ways of entertaining yourself in line!

A lil selfie from Saturday cause I actually got out of the house and put on makeup. Something people who work from home sometimes forget to do. 🦚✨
🌈✨💅🏼
A lil picnick 🥰
Beautiful winter ❄️
Nothing beats the beach with my beach beatch 💙
Is it even an LA Trip if I don’t post a photo of the sky? 😍🌴hello, old friends🌴