This past October has been such a blessing!

To start off I would like to thank you, my readers!!! Thanks to you all I am officially the Queen of Peter Pan on the internet!! I sold over 150 Peter Pan hats on Etsy, I passed 100,000 views on the blog, and as the countdown to Halloween drew closer, I received over 4,000 daily views! This was so fun to witness, and I really couldn’t have done it without you. So, here’s a GIANT THANK YOU thank you for searching the internet for “how to make a Peter Pan costume,” and clicking my link. It means so much to me. 🙂 I hope to make even more great tutorials for your convenience in the future!

With the extra money from selling Peter Pan hats I decided to treat myself. This was the first time I’d had some extra spending money basically since I had to start paying off student loans one year ago, so I decided to splurge a little.

I treated myself to a fancy manicure, and I bought myself my first tattoo.

What do you think?

The manicure is to die for! Seriously, I don’t think I could ever go back to “normal” nails. I got claw acrylics, the kind that are pointy. They are so fun to wear and my hands feel 10 times as feminine!

I’ve never liked my hands before because they’re rather wrinkly for their young age because I’m a crafter who obsessively washes her hands… But with the extra length they make my stubby fingers feel longer, and the claw shape and sparkly color gives me a feminine edge that I didn’t even realize I was missing until it was right on my fingertip, literally!

I had to relearn how to type and use my phone of course, along with several other everyday tasks, but now I even use my hands in a more feminine way. They feel so natural now and I seriously don’t think I can go back. I have always been rather aggressive and boyish in my actions before, so I love how the nails force me to hold my hands like a lady. Pinky out!

I also modified my body in an even more permanent way… I got my first tattoo!! It is a simple black outline of a triangle right behind my ear from the guys at Alchemy Tattoo in Silverlake. I wanted to start with something small just to get used to the process, and I found that the process is very simple, and didn’t even hurt. ((To be honest, the nails hurt worse than the tattoo because my manicurist kept filing down all my gross dead cuticles, gross!)) Anyways, here’s another #selfie….

Before I tell you what it means, I would first like to make a statement that a tattoo DOES NOT have to have a meaning. You could simply get a tattoo because you find it attractive. That is good enough “reason” for me.

People get so judgmental over tattoos! Hey, it’s your body you can do what you want to! As long as it isn’t publicly hateful, I’m gonna be ok with your self expression whether it means something significant or not.

However, I also know that a tattoo is a permanent image that is literally drawn into your skin forever….It becomes a part of you.

My tattoo does happen to have some meaning behind it… a great deal of meaning, actually. I know, I know, it’s just a triangle, but triangles can represent many different things!

This is what my tattoo means to me…

The biggest reason I chose a triangle is because it’s symbolic of three. Three has always been a significant number in my life because I am one of three.

That’s right, I am a triplet, I shared a womb with two brothers who I love very much.

And cue the questions… “Do you look alike? Do the boys look alike? Are you identical?” (Yes, all three questions, in that order too). So here is a photo for you to decipher. 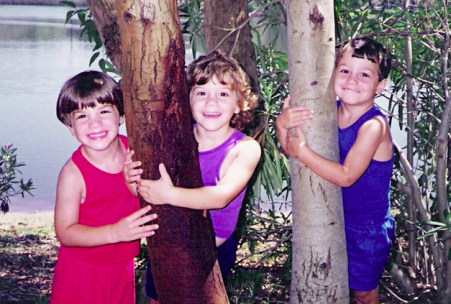 I don’t get to see these boys as often as I like. One of them is doing very well for himself and lives in San Diego. The other struggles with a mental illness called Manic Depressive Schizophrenic. Or Bipolar, to put it simply. That means his brain chemistry causes him to become completely irrational during high and low mood swings. Now isn’t the place to go into details, if you’re curious you can start reading up on it here.

This disorder has been very hard on all of us as a family, himself included, since his diagnosis 4 years ago. Choices had to be made, and unfortunately he couldn’t live with us anymore. I don’t actually know where he is now, he doesn’t have a phone and his Facebook posts don’t make any sense, but that does not mean, and will never ever mean, that I don’t still care for him. He will always be my brother, my triplet brother…. No diagnosis, no words, no distance, no punches, and no time apart will ever make me love him any less. I have tears streaming down my face right now just thinking about him as I write this, and the only thing I can say is that I love him and that he matters to me.

So this tattoo is my public statement:

He might never see it, but I know it’s there…

I love you Grant, YOU MATTER.

Being a triplet is all I know, and now that I’m out on my own, I realize more and more how much I love my family, and how growing up with those two boys at my side has shaped me… I’m currently working on a much longer “life as a triplet” post, so stay tuned, it includes never-before-seen thoughts! Very exciting, I know. 😉 But for now, I just wanted to talk about the tattoo.

I also like the triangle because I’m into the thin black geometric look. As Don Draper would say,

“make it simple, but significant.”

Triangles are also the strongest shape, architecturally. I’ve always been a strong woman physically, and into adulthood I’ve learned to be a very strong woman emotionally. A woman must be strong, we must hold our heads high and keep marching. Hallelujah, Amen.

So I have only shared with you my three personal favorites, but a triangle can be symbolic of a great deal more. If you want to start referencing Harry Potter, or the Holy Trinity, feel free. All art is open to interpretation. A triangle to me could be different than a triangle to you.

“Art is what you can get away with.”

…Here are two more photos I took with iPhone 5s and edited with VSCOCAM to show off my kitty claws.

Thanks for reading! Leave me a comment if you’re feeling friendly. 🙂